I haven’t been to Miami, but that’s one description I heard of Busan: that it’s similar to Miami.  Did that get your attention? Good, but I apologize for I won’t be dwelling on that comparison.

The trip to Busan was on the weekend prior to my home leave.  I initially envisioned staying at the apartment, cleaning, packing, basically preparing so that the day before my flight, I am relaxed.  But 3 weeks before, as I was talking to 2 members during one after-meeting session of Seoul Toastmasters, the idea of going to Busan popped up.  One member, Ian, is actually from that metropolis.  And the other one, Maite, who I go wakeboarding with, got excited with the prospect of traveling there.

I have an inclination towards spontaneity.  And Maite’s sudden decision of having this trip, checking out her calendar and choosing a date already, made me excited.  So we decided to go!

We went there via KTX from Seoul Station.  Tip: there is no fixed platform for trains going to a specific place.  So if the 8:20 train to Busan was in platform 5, do not expect the 8:30 train to be leaving from there as well.  Am I the only one who doesn’t know this? 🙂 By the way, the roundtrip tickets cost KRW 108,800.

Along with Maite and I were Tiemen, Maite’s friend, who I have met prior to this trip because of wakeboarding, and Lotte, Tiemen’s friend, who I met for the first time.  Ian on the other hand, met us in Busan Station (in Dong-gu) and acted as the tour guide.

So what’s Busan anyway?  As I have seen, it is a city with a large fishing industry, logically, as it is by the sea, with busy ports to boot.  Judging by the towering residences, I guess it’s also a prime spot for real estate.  And as I expected, tourism business thrives.  The beaches’ sand is yellowish, and the waves are good for surfing.  That activity was actually the main purpose of our visit.

When we arrived, Ian took us to a restaurant famous for serving blow fish (puffer fish).  Then we headed to Haeundae, but before going to the beach, we went uphill to a supposedly good spot to view the Ocean.  It was cloudy and drizzling from time to time that day, so we saw nothing!  Afterwards, we went to the beach to enjoy surfing!

And we did not!  There was a surfing competition, which involved basically all the shop owners and surf instructors.  No boards were for rent and no instructors were available to teach beginners like Lotte and I.  We were still carrying our bags as we looked for surf rentals.  Unsuccessful, we decided to go look for an accommodation first so we can drop our stuff.

We climbed uphill and found a jimjebang.  It was part of the rough plan, not the hiking, but going to a jimjebang.  Actually, we thought of sleeping overnight at one instead of a hotel or inn, as it is the cheapest option. 🙂  However, since they wouldn’t allow us to leave our bags without checking in, and if we check in, we couldn’t leave the place unless we check out, we decided to look for a cheap hotel instead.  We did find one, not sure of the name, which offers rooms for 2 costing only KRW 30,000.  We got 2 rooms, dropped our bags, made a quick change and headed back to the beach.

For a second time, we tried to find a way to surf, but to no avail.  Unless, all of us were willing to compete, but even Tiemen, the one with most surfing experience didn’t want to.  Wait, women’s competition was already closed, so there wasn’t really a chance for all of us to surf.  A little disappointed, we chose to enjoy the beach anyway.  Simply going to the water, swimming and clashing with the waves are fun to do, right? 🙂

The water was a little cold, so we didn’t stay for hours.  We went back to the hostel, changed (or just grabbed dry clothes) and headed to the jimjebang again.  What is a jimjebang, you ask?  It is a bath and sauna house (or building) which is quite common in Korea.  Inside, men and women have separate bath and pool areas, as it should be, for everyone gets naked in them.  There are pools and fountains of varying temperatures, saunas, and massage rooms.  There is also a common area where you can sit, relax or even sleep on the floor after having a bath (one is supposed to be clothed here already).  That was why we first thought of sleeping overnight at a jimjebang instead of a hotel.  The jimjebang we went to is called Vesta, which I heard was one of the best in town.  It costs KRW 9,000 per person.  By the time we were done, it was already late, so we decided to have our dinner in this place as well.

By around 10 PM, we checked out of Vesta and went down town.  Ian, who left us at the beach to have some family time, picked us up.  He told us even weeks before; convincingly I must add that there are many fun bars in Gwangalli, so we decided to go there.  But along the way (and maybe to Ian’s slight disappointment), we decided to go to a Norebang (Videoke house) instead.  Another friend of Maite, Cody, who lives in Busan, also joined in.  We had a great time singing, but ran out of batteries before our cut-off time.  Ian had to go, and as for us, even with the low energy, we still decided to grab a drink in a bar before going back to the hostel to sleep.

It was sunny, great!  That’s the summer we recognize!

Tiemen saw that we can wakeboard in Gwangalli beach.  So, after checking out and having breakfast, we hired a taxi going to Gwangalli.  How nice of the taxi driver to pass through the scenic Gwangan bridge!  Tip: passing by the bridge meant the taxi driver took a long detour.  He tricked us, and we noticed it early on.  Tiemen ordered him to drop us off as soon as the taxi neared the beach, but it was not after we have crossed the bridge.  That’s one thing a tourist should be aware of in Busan – some taxi drivers may cheat you.  We didn’t feel bad, as we had the chance to see the bridge up close.  But be attentive.

I have not yet shared in this blog that recently, I got hooked to wakeboarding.  I have done it a couple of times with Maite and Tiemen.  And we gladly welcomed the chance to do it in saltwater.  Looking at the pictures I took, it seemed like we had another wakeboarding outing, ha ha!  As it was a little rainy the day before, I hid my camera most of the time.  Most of the pictures were of this day, and a lot of them show captures of wakeboarding.

We went to Jagalchi Market, imagining a sumptuous seafood meal for late lunch.  Once we arrived, we went around the area first before looking for a restaurant.  Fresh sea food abounds in this area, and it’s somehow overwhelming to see.  I just wanted to try all of them at once!  Lotte suggested that we go to a buffet restaurant that she tried before.  Unfortunately, it was closed as it was past lunch time, and will only open again by 5PM.  So, we had to look elsewhere. 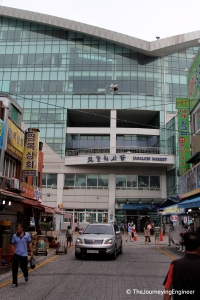 While we were in Gwangalli the night before, we saw lots of king crabs in aquariums outside several restaurants.  That’s why we thought of trying them in Jagalchi.  Alas, the price was twice as much (KRW 70,000 per kilo), and we opted not to try it this time despite our hunger, as it was too expensive!  (1 king crab weighed about 2 kilos.) So, we looked for an alternative.  The area seems to be famous for serving eels as well, so we decided to try that instead.  After looking for bargain prices, we ended up at a small restaurant that just costs us KRW 39,000 all in all.  Tip: Grilled eels are more expensive than those cooked in red sauce and vegetables (not sure how to call/describe it, red spicy eel stew?).  As customary to seafood pricing, large eels are more expensive than small eels per kilo.  With that, you can easily conclude that we ate small eels cooked in red sauce and vegetables. 😉

After our really late lunch, we headed to Busan Station and waited for our train.  We arrived at around 10 PM at Seoul station, ate late dinner, and finally went home.  You guessed it, Monday blues followed, and I crammed packing before my flight!

P.S. This marked the beginning of my almost 3 weeks of travel.  Come back for more stories!

I MAY HAVE GONE TO

Would you like to collaborate? Drop me a message.