(This is part of the chronicles about my second visit to the USA. Read the introduction if you haven’t yet.)

Colorado Springs, Colorado was my first destination in this trip.  I needed a layover in Dallas, Texas because there was no direct flight available.  I knew just by riding on the plane to Colorado Springs that the place will be much different from California.  Yes, I judged it by the mix of people in the plane. Needless to say, it wasn’t diverse.

Since I arrived at nighttime, I didn’t have a bird’s eye view of the landscape during the plane’s descent. Although, I was told already that the place has red rocks.  Having been to Sedona (in Arizona) before, I looked forward to such views.  But before that, I needed to look for my aunt first.

The domestic airport was small and uncomplicated, so it didn’t take long before I saw my aunt.  After I took my luggage, we met my cousin (my aunt’s youngest son) and headed to their home.  Another cousin (from the same aunt) met us, together with her family.  Introductions were made, we caught up with stories, and plans for the next day were set.  There, I already had the means to get around Colorado Springs.  Before the touring, I already had first impressions. Two of them were: 1) the place seems peaceful and; 2) the air is quite dry, my contact lenses were screaming, “Eye drops!”

The first place we visited was the “Garden of the Gods.”  This is where the giant red rocks are. It may not be as grand as Sedona, but it’s still beautiful.

I was only expecting to see the red rocks. The important thing was my time with these relatives.  However, I saw more than what I hoped for.  Question to non-Americans, what comes to mind when you hear Colorado Springs?

Did this occur to you?

And look at the Cadets Chapel at the Air Force Academy: 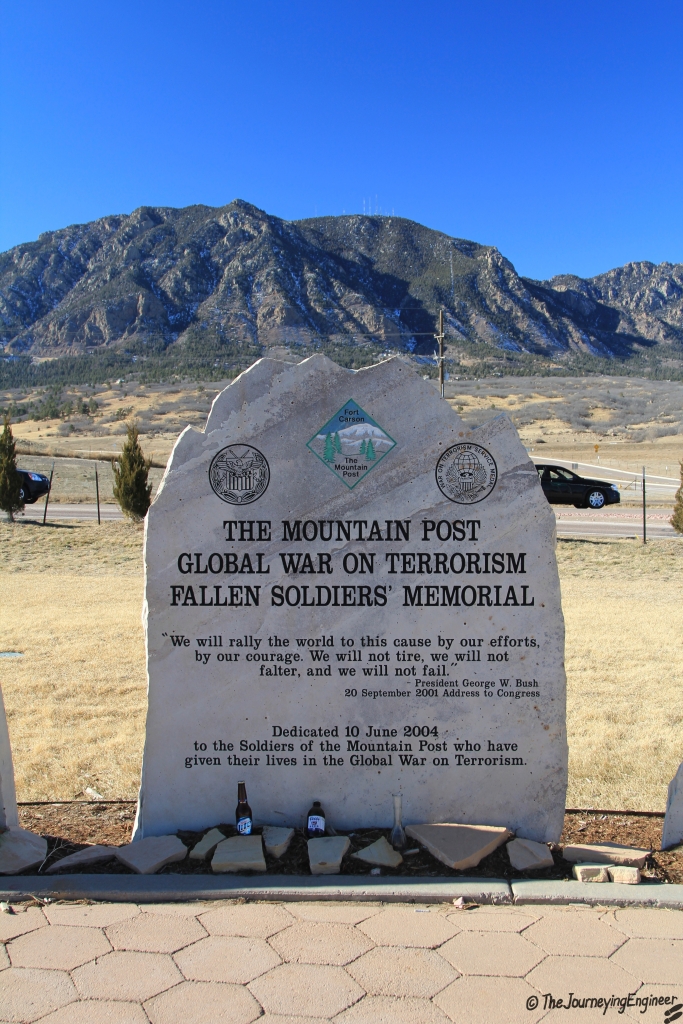 It includes this piece of metal from one of the twin towers destroyed during the 9/11 terrorist attacks:

I had about a day and a half to explore the city. Good thing my relatives were very enthusiastic to show me around. And for that, I’m thankful.

One advantage of an unplanned trip is the absence or lack of expectations.  I came to Colorado Springs just thinking of spending a short time with relatives.  And I ended up seeing so much in less than two days.  Not bad for the first leg of the trip!

Evening of December 30, 2013, I checked in at the United Airlines counter for a flight to Los Angeles.  My baggage was a few pounds heavier than the limit (I did a bit of shopping, hihi).  I didn’t know that 100 dollars extra would be charged for whatever excess in weight.  It’s a good thing there were hardly anyone by that time, so I took out some stuff for hand carry.

In a few hours, I would be in California.  Yes, I was excited. To be continued…