A week before going to the US, I was playing with the website roadtrippers.com, which I just found out then.  I prepared an itinerary for Jen et al. for the week I wasn’t with them yet.  They didn’t use it however, which was fine.  The important thing was I found a tool for traveling.

True enough; the site was helpful in planning for this leg of the trip.  We needed to be aware of sights and restaurants along the way; our pit stops should have a convenient location, and all that.  And roadtrippers provide a lot of information.

January 6, 2014 – the unit family: Jen, Alex and Just, together with me started the long drive eastward.  We decided to cut the land travel into two parts, and our first pit stop was Phoenix, Arizona. It’s worth mentioning that driving from Las Vegas to Arizona in late afternoon to sunset was a treat for the eyes. 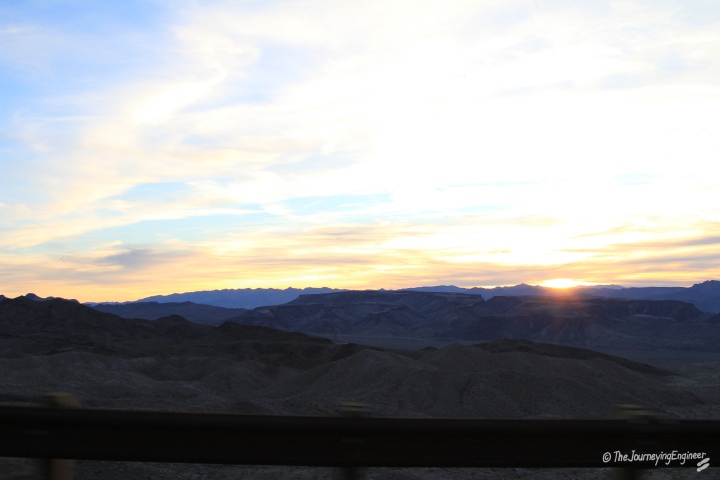 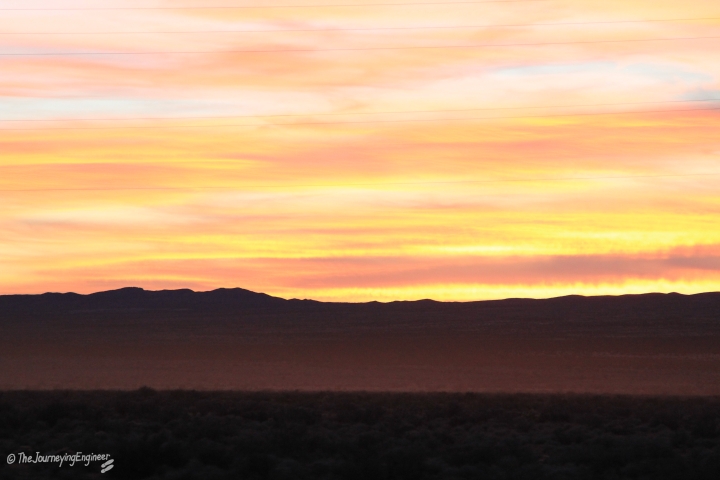 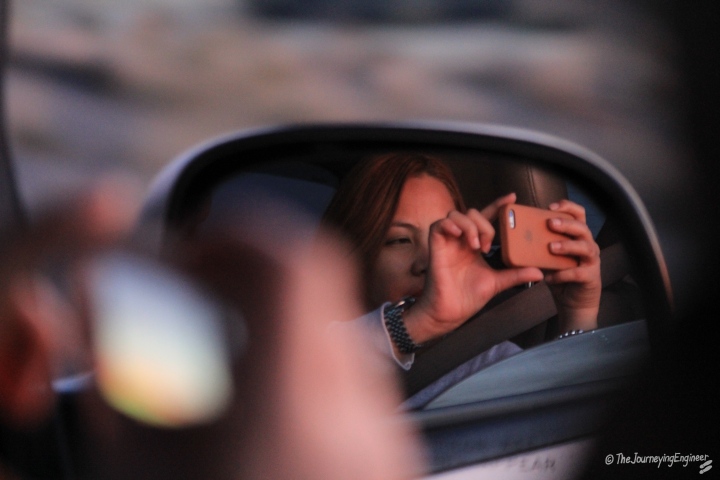 We stayed at E-Z 8 motel for the night, which was nearby a McDonald’s – convenient. 🙂 The McDonald’s had reliable wi-fi, which was a savior for Jen, who needed to address work-related matters. For some reason, we couldn’t connect to the Internet in the motel.

January 7, 2014 – U.S. Egg Breakfast and Lunch – dine at this restaurant when you chance upon it in Arizona.  This is where we had brunch, and it was so good!

It fueled us rather well for the long trip ahead.

Before we completely left, we dropped by Rawhide Wild West Town.

It was closed however, apparently, I didn’t research well enough to see its schedule. 😛

We traveled more miles towards east and again enjoyed the views along the way.  Also, we had a little fun asking for trailer truck drivers to blow their horn, for no important reason.  Alex mentioned that you could ask truck drivers to do that.  The real purpose of blowing horn is to be awakened by the sound if one gets sleepy while driving.  We weren’t sleepy but just wanted to experience it, so Jen signaled to a truck driver who enthusiastically blew the horn for us.  Then we tried it a couple more times.  Tee hee!

And then, we reached the boundary we wanted to see:

This is the state we’re aiming for.

We read a little about ghost towns in New Mexico and we hoped to see one of them before heading to our final destination. However, these ghost towns are not just readily accessible by the public and not really opened daily. In short, we were not able to go inside one. Again, my research was not that thorough. But we did stop by at Steins Ghost town – just by the gate. 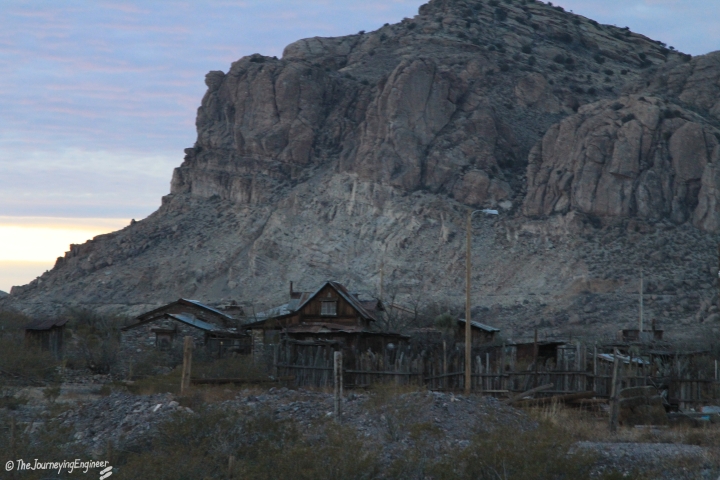 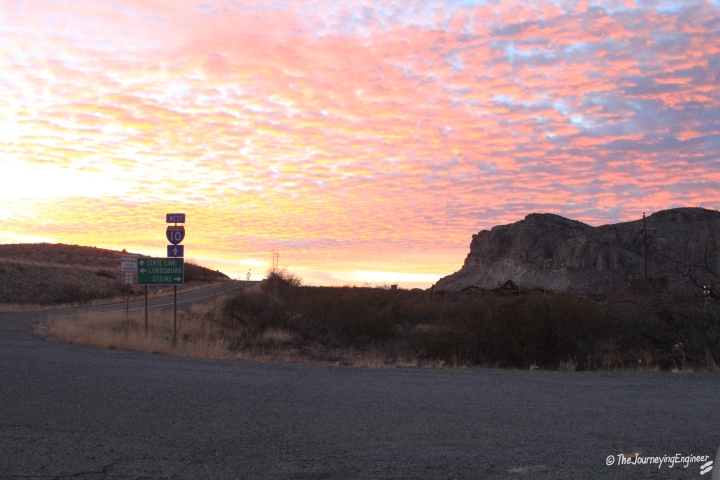 Side story: While posing for photos, Jen’s eyes suddenly widened. “Wait, there is something, what do you call that? An animal, it’s a bull. There is a bull!”  To which we reacted by hurrying inside the pick up.  “There, can you see it?”  And then we saw, a boar.  In fairness, it may still be dangerous.  But we wouldn’t have chickened out like that had she used the correct term for the animal. LOL

After covering more miles, we reached our next pit stop: Las Cruces, New Mexico. We stayed at Days Inn, which includes breakfast in their charge. An assurance of breakfast for the next day is a good thing.

January 8, 2014 – after having breakfast, we got ready and then checked out of Days Inn. We were to travel less than an hour to reach the main attraction we wanted to see in the trip. One thing I noticed along the way was the color of the buildings and houses. Almost all of them have the same color as the desert! Help me out here, but to me it seems that there is a law in Las Cruces or even in the whole New Mexico saying that all buildings should blend in with the desert. Is this the case?

So why did we go to Las Cruces? This city is near Alamogordo, where one can find the White Sands National Monument. The White Sands is a natural wonder – how in the world would a big field of white sands form in the middle of the desert? If you visit this place, you will know, as it is explained in the visitor’s center. Or you can just Google it. But it’s fun to know about it only when you get to see it in real life. 😉

I will now let the pictures do the talking: 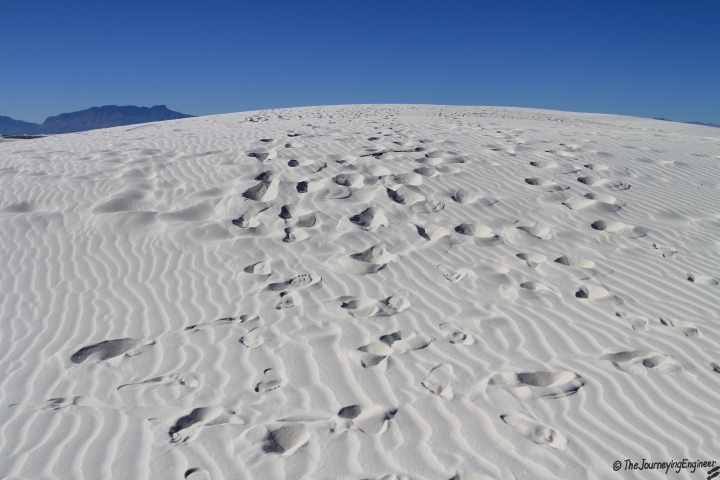 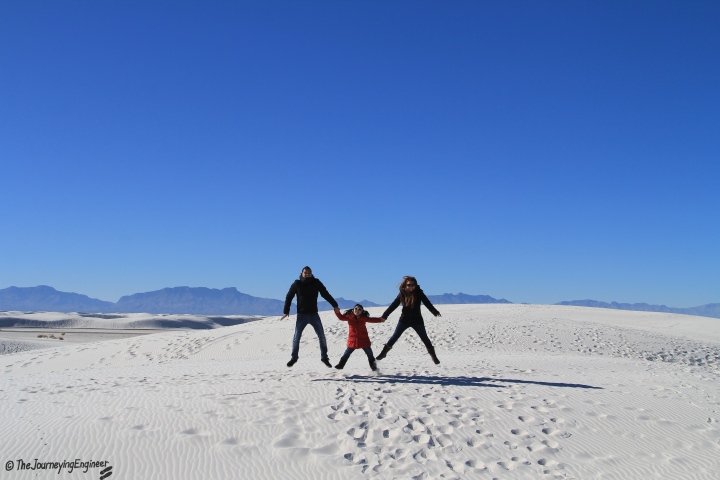 After that, we headed back to California, but not without having a pit stop in Arizona again.

Oh by the way, there is a Dinosaur in Tucson, did you know? Haha!

Side story: Remember the truck horn blowing I mentioned earlier? We got to experience it again without asking for it.  Jen took over the wheel a few times to let Alex rest.  At one time, on our way back to Phoenix, we were side by side with a big truck.  Jen was a little bit afraid of the truck that she was trying to avoid getting too close to it.  However, in doing so, our pick up was wobbling a bit.  Then this trailer truck driver blew his horn and sped up.  It was nighttime already and as the truck overtook us, the driver also flashed us with light for a second.  He must’ve thought Jen was sleepy.  So there, we got to witness its real application.

The road trip to New Mexico was a really memorable part of my US trip. It’s the longest land travel I undertook: from Las Vegas to New Mexico and back to California, we covered around 2000 miles.  And maybe next time, at the right season, I can experience longer road tripping, with the aid of roadtrippers.com. (No, this is not a paid promotion for the site. 🙂 )

One thought on “TJE 26: Seeking Enchantment (On the Road in a Big Country… Again! Part 5)”